Broken. Cracked. Damaged. Unsightly. Destroyed. If these words were used to describe something in every day conversation it would typically mean that it should be thrown away. Except, when you bring Kintsugi into play.

I recently read an article about Kintsugi. Up until then I had never heard of this Japanese art form. If you are like I was you probably need me to explain this to you. Kintsugi, is pottery that has been damaged and repaired with gold tinted epoxy. The philosophy behind this, as defined on Wikipedia is, "Japanese aesthetics values marks of wear by the use of an object. This can be seen as a rationale for keeping an object around even after it has broken and as a justification of kintsugi itself, highlighting the cracks and repairs as simply an event in the life of an object rather than allowing its service to end at the time of its damage or breakage.".

I was so taken by this philosophy and the art driven by it that I continued to follow the little Wikipedia rabbit trails, as I fell into a Wonderland of possibilities. One of my trails led to Wabi-sabi. UTNE Reader, in my opinion, describes it best, "...wabi-sabi is the art of finding beauty in imperfection... ...It celebrates cracks and crevices and rot and all the other marks that time and weather and use leave behind. To discover wabi-sabi is to see the singular beauty in something that may first look decrepit and ugly.".

Chronic illnesses often bring with them awful side effects and additional diagnoses. It can leave a person feeling broken, cracked, damaged, and deserving of "being thrown away". Instead we can look for the wabi-sabi in things, look beyond that damaged surface, and see the beauty of the person. The wisdom and patience of the trials they have overcome. We are more beautiful and stronger than even for being broken. Embracing the brokenness is beauty. 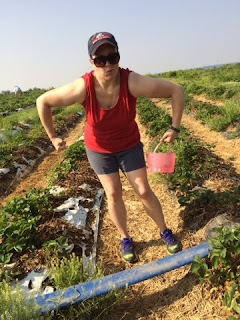 Hello again, I haven't been very good about keeping up with my blog. (Insert embarrassed face here.) Truth? My only excuse? I have been having troubles, in the past six months, with juggling things. Being a mom (and alllll that entails), work, and managing my health have become huge for me in the last six months.

Having said that, I'm still having little conversations with people when I can to educate about invisible illness and chronic illness. Both of which often overlap each other. I regularly feel like I'm embarrassed to tell people about my various health problems. It's a perceived weakness, in society. But really it's proof that I'm strong.

Wish we could turn the tables on the perceptions of chronic illness and shine the light on the strength of those living every day with their illness.
Posted by Blogger Mama at 6:54 PM No comments:

Guys, it's been forever!! Crazy long time! I spent the last part of the summer soaking up all the time I could with my girly before it was over.
Once school started I went back to work in the school's cafeteria. This year my body hasn't acclimated as well as it has in the past with all the walking and moving. Energy levels have been pretty low for me, which has kept me resting a lot more on the couch than I've been accustom to lately. My joints have not been happy with me and I've developed bursitis in my shoulder from the repetitive movements my job requires. My rheumatologist gave me a shot of Cortisone in my shoulder which worked wonders for me! And now, for the most part you are caught up with the basics that I haven't had the time or energy to share with you recently.
A big part of my life in the fall is soccer. My girly plays at least one game every weekend. In the past year I have become highly sensitive to the cold due to my Reynaud's Disease. Fortunately up until now it's been fairly warm to be outside. Now it's beginning to get chilly in the mornings in Pennsylvania and I am having a harder time keeping warm. I feel absolutely ridiculous because I am bundled up in scarves, hats, and gloves already in 50 and 60 degree weather. I am blessed with a super understanding and supportive husband (after he's chuckled at me for only having my nose sticking out).
My husband has previously found me Hothands to use in the wintertime. They are little packets that create heat when exposed to oxygen. I pop them in my sweatshirt hoody in the morning and they are still warm ten hours later. I love them and they keep the Reynaud's issues away for the most part.
This year my honey found me something new to keep my hands warm outside! They are gloves/mittens that Hothands makes to allow a person to tuck a heat pack into and take them on the go. They have glove fingers with a mitten fitted around it to keep the Hothands in. And the pointer finger, of the gloves, are fitted with a touch sensitive pad to allow you continued access to your iPhone. Which will definitely come in handy for me as I have always had to choose between keeping my hands warm or taking pictures on my phone. Boom! Problem solved!!
The gloves were very affordable and I am completely giddy about them!!! 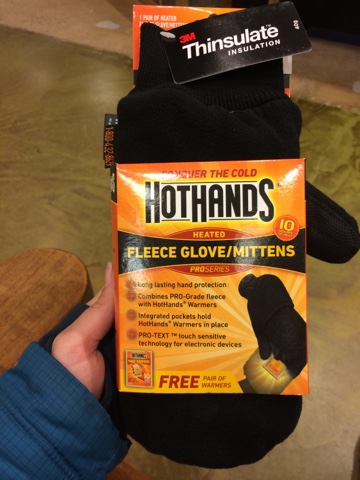 *I was not compensated for these in any way, nor was I asked to write this by anyone. This is simply me writing about a great find that might help others with their circulatory issues. (Wish I could test out more of their products as I have loved them all so far!!! Ha ha ha!)
Posted by Blogger Mama at 8:57 PM No comments: 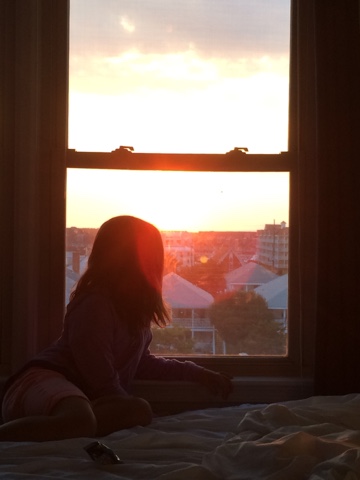 This past weekend my little family ran away to the beach. It was such a gift to me. A long moment of joy. I had no cares beyond what fun thing we were going to do in the next hour and which treat to buy for dessert. It was marvelous, and I feel like this pictures captured it so well!!
I wish you moments of pure joy and peace in this coming weekend!
Posted by Blogger Mama at 9:54 AM No comments: 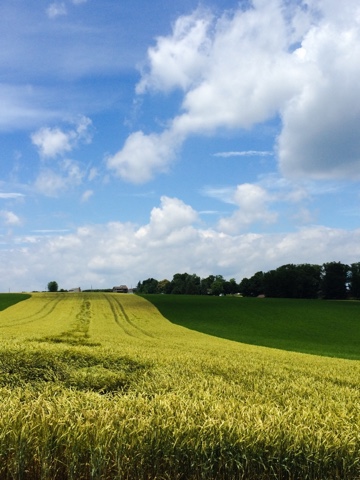 I realize I haven't post anything in awhile. I'll try to do better but can't promise.
My girly and I have been busy doing a whole lot of nothing. And we're loving it!! Every once in awhile my mommy guilt kicks in and I start to feel guilty that i haven't done more with L this summer. (I've spent a few days on the couch this summer for sure.) But then I remind myself that we are still making some amazing memories just sitting at home whiling away our days doing "a whole lot of nothing". And if we were so busy rushing around to get to one activity or another then we'd be missing the little things. Like the breathtaking view we got one lazy afternoon as we made our way to pick up our csa box for the week. It's the little things that count the most sometimes.
I hope your summer is going great!
Posted by Blogger Mama at 4:05 PM No comments: 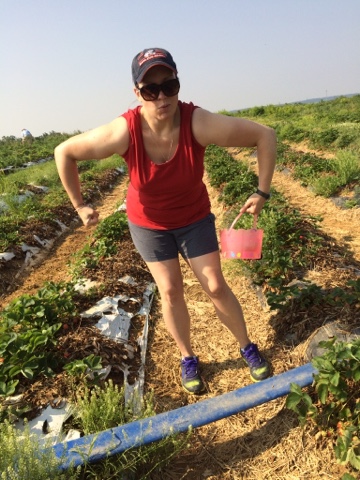 My girly and I decided to go berry picking one day last week. We slathered the spf50 on, threw on my hat, and took off with our buckets to our local Farmers Market. 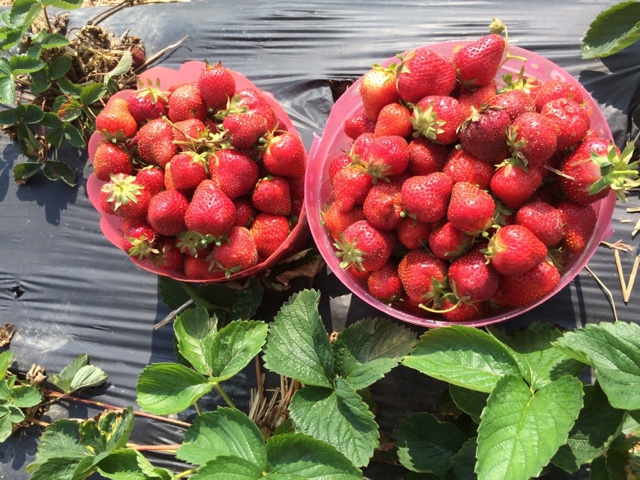 We ran into a great bit of luck and found some amazing berries in the fields! And somehow we ended up pick nineteen pounds! Yes. You read that right!! 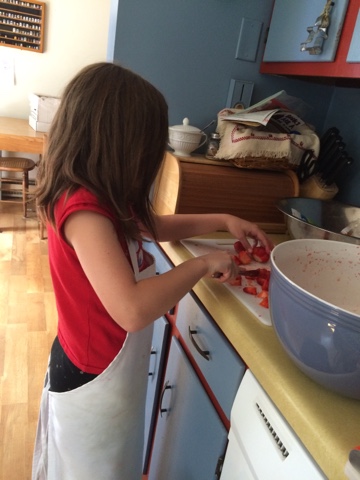 My girly and I spent the afternoon slicing up strawberries. We set some aside to make a pie later this week. Some got sliced up and sugar was added (my girlys favorite way to eat strawberries), more had the tops cut off and were thrown in the freezer for smoothies, and the rest were sliced up and frozen to use with strawberry shortcake sometime in the future. I was pooped by the end of the day, but it was worth it!
Posted by Blogger Mama at 9:48 PM No comments: 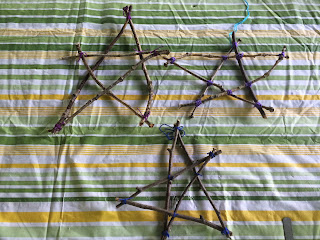 I hope everyone had a great Memorial Day weekend! 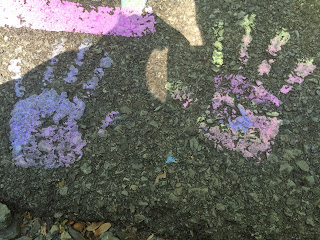 We spent the weekend, camping with family, with no phone service. Perfect! 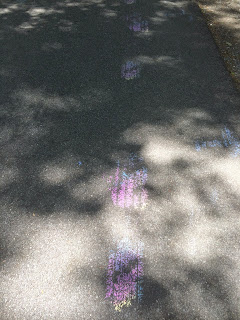 Blogger Mama
I am a 34 year old mom of a beautiful girl. I have Sjogren's Syndrome and I am desperately trying not to let it rule the way I live my life. We are busy most of time and bring my husband (her daddy) along for the ride!

Sjoggie StAHMer | Promote Your Page Too